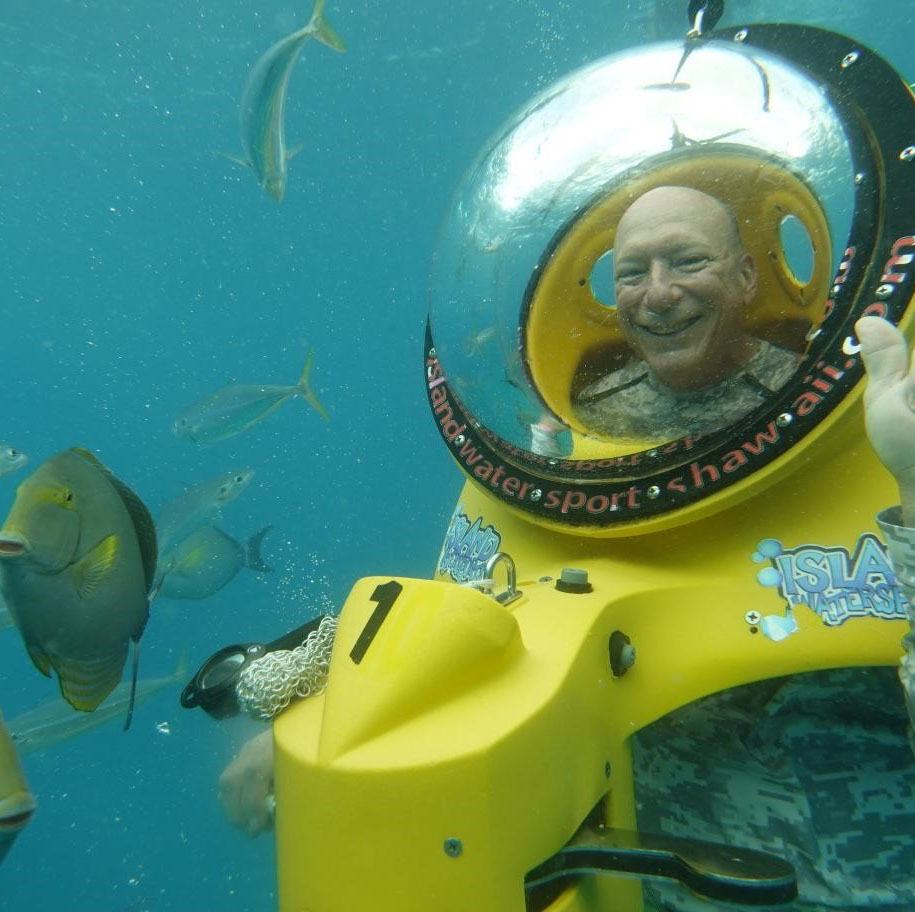 Whoosh! was the sound Kevin heard as he rode a scuba scooter under the waves outside Waikiki Beach, Honolulu. Green sea turtles about two feet in diameter paddled by as he jiggled a mesh fish feeder with bread crumbs. “You propelled through the water like riding a motorcycle,” he said. “That was a blast!”

He and his wife, Lenee, adventured to Hawaii with their children to see sights never before encountered. “The beaches were beautiful but a bit rocky,” Lenee said.

The family transited from surf to shore and hiked Diamond Head Crater, an extinct volcano. “We thought it would be an easy 1 ½ miles as the beginning of the trail looked like a sidewalk,” Lenee said. “But soon the rocky incline went straight up, and we were huffing and puffing.”

The workout ended at the summit where they saw WWII bunkers. “My dad and grandfather both served in the Navy during WWII,” Kevin said. “My dad enlisted at 17 and had his mom sign for him because his dad already was overseas.”

With that personal history in mind, they toured the USS Arizona Memorial, which was constructed above where the actual battleship exploded and sank December 7, 1941. The lives lost on that vessel alone were 1,177 officers and crewmen.

As Kevin and Lenee pondered the sadness of that event, they noticed on the horizon over Honolulu a radiant rainbow. The spontaneous symbol of hope touched them.

According to the Bible, the association of hope with a rainbow dates to Genesis after the flood. God promised Noah: “Whenever the rainbow appears in the clouds, I will see it and remember the everlasting covenant between God and all the living creatures of every kind on the earth” (Genesis 9:16 NIV).

View of Honolulu from the USS Arizona Memorial


**If you would like to learn more about Pearl Harbor and WWII, go to the National Park Service link at https://www.nps.gov/perl/learn/photosmultimedia/photogallery.htm.

**For more information about Diamond Head State Monument in Hawaii, go to https://dlnr.hawaii.gov/dsp/parks/oahu/diamond-head-state-monument/.