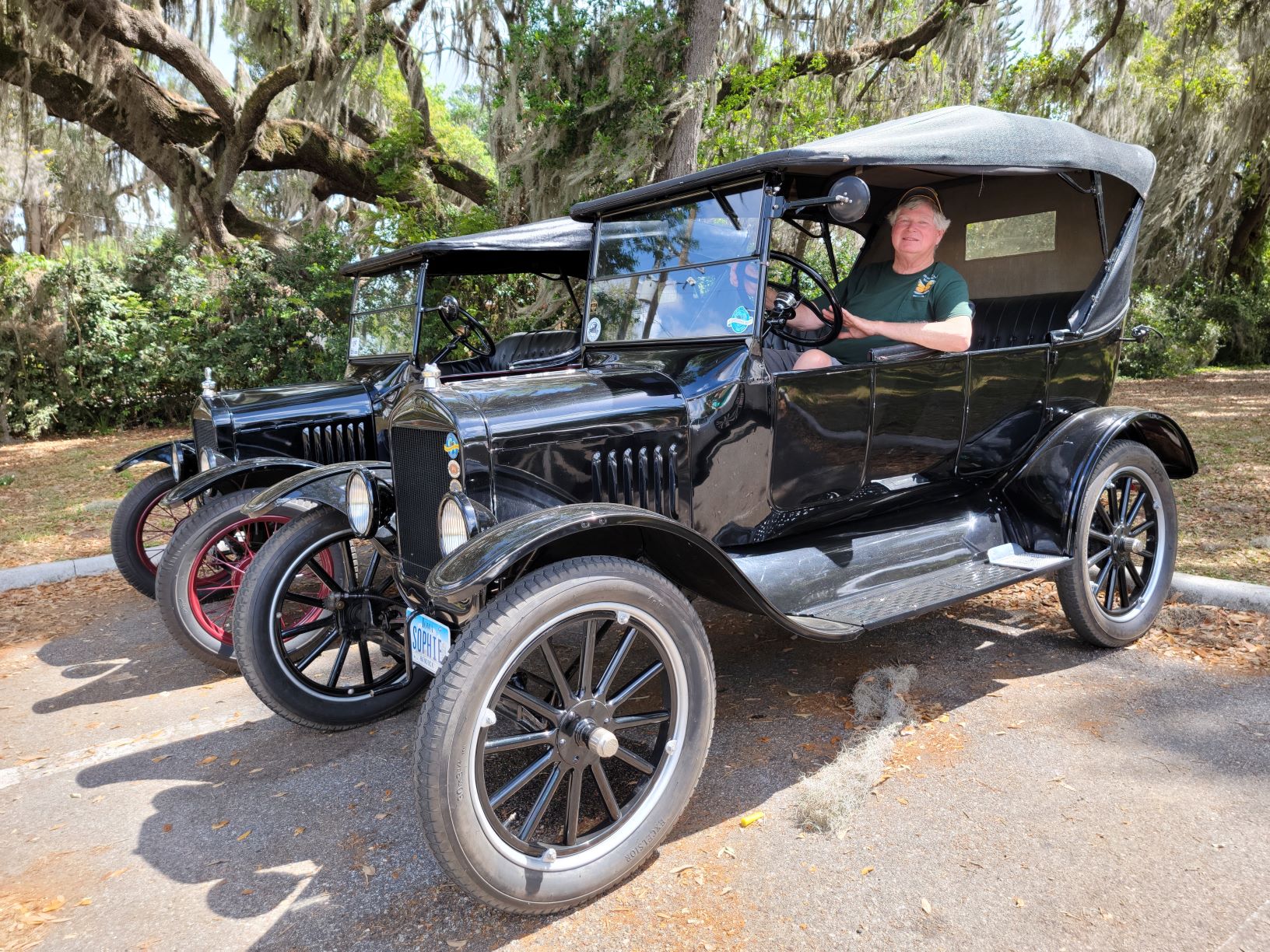 “Miss Sophie” is pretty spry for her 97 years. She’s still tooling down country roads to log in miles as a Model T touring car despite being built in 1925 at Henry Ford’s factory. She traveled in a car hauler trailer from Indiana to participate in the Model T Ford Florida Tour being held this year at Howey-in-the-Hills with about 130 cars participating.

Sporting smiles from their antique vehicles, the Model T owners are visiting lots of back country roads in central Florida traveling about 60 miles every day. “Henry Ford started his company in 1903,” said Benny Young. “There were models A, B, C, F, K, R, N, S and then in 1909 the “T” was introduced.”

Passionate about history, Young added, “From 1909-1927, Ford sold 15 ½ million Model T cars throughout the world. Prices started at $850 for a touring car in 1909 with no windshield, no top and no headlights.” As the auto assembly line evolved, prices lowered to $650 and included the windshield, top, and lights due to improvements.

As the process further refined, Ford manufactured two million Model T cars a year by 1922 at $300 each, according to Young. But not all the focus was on pricing. A key component of growth hinged on change in lifestyle. Prior to Ford’s innovations, people had limited access to travel. “In 1909, most people walked or had horses for transportation, and that animal only could go about 10 to 15 miles in a day,” Young said. “The Model T put the world on wheels.”

With a 4-cylinder motor instead of horsepower, “Miss Sophie” has gallivanted from Indiana to Mexico to the Arctic Circle in northern Canada. Young’s father fell in love with Model Ts as a youngster when he saw a driver deliver groceries in a Model T grocery truck in 1923. Young’s father said the driver gave him a piece of stick candy to help carry the boxes of food into the house. Later in the 1950s, Young’s father acquired the Model T grocery truck and began the restoration process, teaching his son the mechanics involved in getting the truck back in first- class condition.

Now in their 70s, Young and his wife, Patti, enjoy the thrill of discovering new scenes as they showcase heritage with other fans of the Model T. The couple plans to share Sophie the 1925 Model T touring car with family. “I am going to pass Sophie the car along to my granddaughter. Her name is Sophie, too, with the same spelling. Isn’t that something?”

He said the Model T Ford Club of America’s goal is to get younger folks interested. “We want to share the legacy,” Young said.

The Bible emphasizes the importance of teaching young ones the commands of God so that they know right from wrong. Children take to heart what they learn by hearing and seeing what elders model. The Ten Commandments can be found in Exodus 20 and Deuteronomy 5 of the Bible’s Old Testament. Can you name all 10 from memory?

“Place these words on your hearts. Get them deep inside you… Teach them to your children. Talk about them wherever you are, sitting at home or walking in the street; talk about them from the time you get up in the morning until you fall into bed at night” (Deuteronomy 11:18-21 The Message).

You can find the full script of the Ten Commandments online by Clicking here.

Information about the Model T Museum in Richmond, Indiana can be found by Clicking here.

The Model T Ford Club of America has an interactive tour link here.

Youth interested in learning about Model Ts may join a club with parent consent and a fee should Click here.